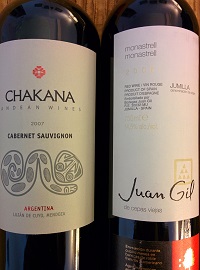 (May 12, 2015) ... Night one of the All Canadian Wine Championships and after a day of Canada I like to open a few things from "away" ... Tonight it was a Juan Gil 2006 Monastrell from the Jumilla region of Spain. Last time I opened an older bottle of this I was aghast to see a plastic cork, this time there was no such surprise. The nose was full of dried cranberry, oak, and cedar; sure seemed quite old aroma-wise. Palate still retained good acidity and much more fruit and spice than the nose let on - sure it's mainly dried fruit but it was still quite lovely to drink.

The next bottle was of Argentinean origin, Chakana 2007 Cabernet Sauvignon ... It was under a black plastic cork and this scared me a bit, but one must soldier on ... The nose was incredibly muted, as in there was no smell to speak of, but the palate proved to be surprisingly robust of red and dark fruit and nicely balance ... The wine died fairly quickly but was drinkable for a little while anyway.