Double the Fun of France 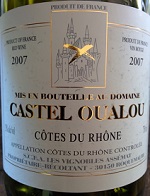 (August 30, 2015) ... A "grab and go dinner", which basically means it was impromptu at someone else's house, so I rushed down to the cellar, grabbed a couple of wines and went out the door. Times like this I take pictures of labels on the fly, or sereptiously at the destination, notes are taken via phone and I look rather rude, but my wife has learned to apologize for my "rudeness" well.

First bottle was of French origins (as it turns out both were) ... Castel Oualou 2007 a wine that barely shows its age with its smooth entry, luxurious black raspberry, tobacco, and sweet cherry; but the finish is not as exciting, it's a little funky at times and takes on a seemingly metallic aftertaste. 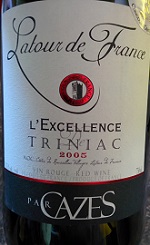