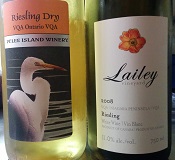 (May 28, 2016) ... It's a weekend away in the Lake Erie North Shore, staying on Pelee Island courtesy Pelee Island Winery, the weekend had it's ups (great lunch and tasting at Cooper's Hawk) and downs (pathetic amount of quality wines at Colio) - these wineries suffered through two horrible winters which left them with little to no wine ... thankfully 2016 was a bumper crop and we'll be seeing wine again from that region.  But before we see or talk about that, we have to talk about what we opened of interest, starting with an older bottle of Pelee Island 2008 Dry Riesling I had sitting around the cellar (?) ... the wine is falling apart 8 years on, but there was still some redeeming character to it, like definite petrol notes and some apple skin - it was more of a curiosity than anything else, it was deemed "drinkable" but nobody did.

Moving on to a Lailey 2008 Riesling, same year as the Pelee, but profoundly different results: the nose and palate both delivered: mineral / flinty notes with apple and just a touch of petrol, plus the acidity was still relatively vibrant which allowed the wine to hold up quite well - I could see opening one of these again in 2 years and finding even more interest in the bottle. 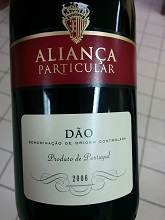 Getting away from Ontario I did an old world and new world  double bill starting with a bottle of Kaiken 2008 Malbec: smoky, mocha, cassis, dark chocolate, cedary, still fresh and young with a black cherry finish; amazing. Finally, we ended with an even older bottle of wine from Portugal, Alianca 2006 Particular: dusty-raspberry, chocolate, mushroom, earthy, craisins, and much more, this was a wine that was layered and complex and a joy to watch open up - and the wine I finished a full glass of.