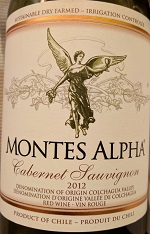 (April 10, 2017) ... On the road tonight at a friend's house and I noticed it was big reds night once I pulled my two bottles out, one from Australia and the other from Chile, both Cabernet.

Let's start with the Montes Alpha 2012 Cabernet Sauvignon, a wonderful bottle that was great when released and so far just keeps getting better: lovely minty blackberry along with cassis, spiced-plum and silky tannins. 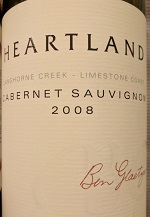 I followed that up with an  even older Cab from Australia, Ben Glaetzer 2008 Heartland Cabernet Sauvignon, and this one delivered on big flavour as well, and being nine years old it also showed great complexity: eucalyptus, black cherry, spiced-plum, black raspberry, and sweet licorice.

Very happy with both wines ... More thrilled with the Aussie due to its age.