Battle of the 2004s (Australia / California)

(August 28, 2016) ... Went into the cellar and grabbed out two bottles from the 2004 vintage starting with a Guenoc 2004 Petite Sirah, from California; at 12 years of age it might have been something exciting, but with the plastic closure the winery was saying it's a drink now wine - BUT THEY DID NOT MENTION THAT ANYWHERE ON THE BOTTLE - so now 12 years later I pay dearly for their inconsiderate labeling. This wine is totally undrinkable. 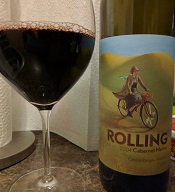 So I move on to the Cumulus 2004 Rolling Cabernet Merlot from Australia: aromas immediately grab my attention: eucalyptus, cassis, and mocha - that mocha follows through on the palate mixing in spice and dried blackberry with hints of eucalyptus/mint; within half-an-hour the alcohol begins to show thru and makes it a little more difficult to drink, but that first 30 minutes was a real revelation.