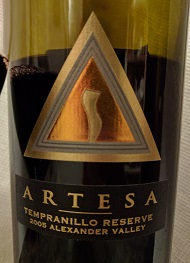 (March 3, 2017) ... A Tempranillo from California was just too weird to pass up when I bought it, and now, so many years later, I opened the bottle. I know that had this been Spanish in origin I would have no worries, but I did open this bottle with some trepidation: dried blackberry, vanilla and licorice with dried plum (some would call it prune) and cassis - not what I expected, but certainly better.