WineReview:  What's in Store – Harvest 2016 (so far)
Three weeks ago I talked with a number of winemakers (via email) about their thoughts on this year’s current harvest and how it was progressing. Then Constellation sold their Canadian holdings and suddenly, it seemed, everything took a backseat to the reaction from this sale (including my own found here) … but through it all harvest continued, grapes wait for no man / woman or child, when they need to come off the vine and into the winery. But now it’s time to take a small step back in time and listen to what we should be expecting from the wines of Ontario 2016.

Posing questions to winemakers during harvest is equivalent to asking an EMS first responder to give an assessment of the situation mid-way through: he’s got a pretty good idea what’s happening, but has no idea of the end result because everything can still turn pear-shaped quickly … since my original email questions were posed and answered we have had more rain and much cooler temperature with a few interesting spikes in-between I guess Derek Barnett (formerly with Lailey now shepherding his own label, Meldville Wines, and consultant to Karlo Estates) was right when he said: “The special thing about 2016 to date is how great the fruit is that is coming in. Ripe, rich flavours and no pressure with the weather (jinxed it now).”

But sentiment about 2016 is uniform across the board: “everything to this point has been very healthy …” said Richie Roberts (Fielding Estate); “power and finesse all rolled into one [that’s] not something we often see,” Craig McDonald (Trius Winery); and even the usually stoic Louise Engel (Featherstone) had good things to say: “The weather has been stellar and it’s a remarkably early harvest.” But none was more effusive about harvest 2016 than Daniel Speck (Henry of Pelham):  “This vintage will go down as one of the best on record, despite the dry start to the season, which lead to some worrying about drought stressed vines, as always the necessary rains did finally come pre-veraison for most varieties/places ... 2016 has been a beautiful vintage.”

I did ask about the rainfall up to “this point” which happened to be mid-October and at the time there were no complaints except for maybe a little “shuffling” of harvest dates but overall most winemakers and principals were happy; though speaking with Marco Piccoli (winemaker Jackson-Triggs) on November 2 he had this to say about the grapes still hanging, “They need to come off.  In my opinion.”

The overall feel for 2016 is extremely positive, with the lower yields of both 2014 and 2015 due to winters we won’t soon forget, it was nice to get back to something resembling normalcy: “the fruit is very clean, and yields are returning to normal volumes,” says Louise.

“The quality across the board is very impressive … and we still feel that way about the Bordeaux varietals that are about to come in next,” says Daniel Speck.

McDonald, who harvests for the Peller group both here in Ontario and out west in British Columbia sounded slightly harried, and why not, his harvest season is longer then most: “Overall it’s been a fluid harvest despite the varietal crossover and madness around bringing everything in at once.”  And Roberts, up on the Beamsville Bench, was “nearly finished whites with exception of Viognier and still haven’t got into any of the bigger reds yet.”

So maybe it’s too early to ask my last question, but it’s definitely something I’ll re-investigate early next year with these folks, but let’s see what they think their biggest surprises of this vintage might be:

Derek Barnett: “I am excited with Sauvignon Blanc, but no real surprises yet.”

Louise Engel: “Honestly I don’t usually like surprises in this industry.” If she had to pick something, “the surprise for us was that our Gewuzt wasn’t as uniformly dead as we expected.”

Daniel Speck: “A lot to look forward to: the Bordeaux varieties are going to shine and the slightly lower yielding Baco Noir is going to be a juicy monster.”

Richie Roberts: “the order that we’ve picked, the varieties and vineyards … very different than previous years.”

And I’ll give Craig McDonald the last word on his biggest surprise of this 2016 vintage: “Chardonnay looks stunning and so does Riesling; but the reds are going to be knockouts and are really going to impress! It feels like the richness of 2010 crossed with the elegance and power of 2012.”

Mother Nature has done here part (she’s almost done) now it’s up to the talented Ontario winemakers to work their magic and time will tell; but 2016 is looking like a harvest our winemakers won’t soon forget, and will deliver wines we should be looking forward to.

Closson Chase 2014 Pinot Noir, Closson Chase Vineyard - $29.95 (W)
www.clossonchase.com
This is one of those wines from both sides of the road (if you’ve been to Closson Chase you know what I mean) – 14 months in all French oak (10% new). The nose is pretty with violets and orange blossom followed by sour cherry and gentle wood smoke; palate proves to be delicate with sour cranberry, cherry, violets and good acidity for balance.  Price: $29.95 – Rating: ****

Domaine Queylus 2013 Cabernet Franc, Tradition - $24.95 (W)
www.queylus.com
For a primarily Pinot Noir and Chardonnay house, and a winemaker known for both, Queylus really seems to know its way around the Franc grape. Nose is tobacco and smoky-black cherry … palate is super silky with blackberry, black cherry, white pepper, cigar box and sweet cedar, but there’s also some vanilla and cinnamon that sneaks in … speaking of sneaking in, there’s about 8% Merlot in the wine and that just might be where the silkiness come from.  Price: $24.95 – Rating: ****+

Malivoire 2015 Gamay, Small Lot - $19.95 (W)
www.malivoire.com
All hail Malivoire and Shiraz Mottiar as King of Ontario Gamay … consistency is the key here and the Small Lot consistently gets high marks because it’s such a delicious and consistent version of what Ontario Gamay can and should be.  It starts off being aged in a mix of French and American oak (63% of the wine anyway) for 6 months with a hint of new (5%). Aromas are earthy, black cherry and cranberry while the palate is silky with black cherry, smoky and earthy elements along with a spice driven finish and a red berry / white pepper linger. Gorgeous.  Price: $19.95 – Rating: **** ½

The Old Third 2014 Cabernet Franc - $38.00 (W)
www.theoldthird.com
I got a double tasting of this wine when trying it with the winemaker: a bottle that had been opened 24 hours and a freshly opened bottle to see how they would differ.  Freshly opened:  First sip there’s some herbal and tobacco notes which help to back up plenty of up-front dark fruit like black raspberry and cassis … 24 hours old:  It’s all melded together, though the herbal note and tobacco seem a little more up-front pushing back on the fruit.  Currently I see the sweet spot here would have been at about 10-12 hours open … then again just hold it a few years and it’ll do all that naturally.  Price: $38.00 - Rating: ****+

Peller 2014 Sauvignon Blanc, Andrew Peller Signature - $30.00 (W)
www.peller.com
A lot goes into this wine; like 70% of it is barrel aged and fermented, while 30% goes into concrete, and then it all ends up in barrel for 9-10 months, resulting in a wine that shows vanilla right off the top with some herbaceous notes and pink grapefruit, while acidity swings in on the finish to help balance the wine out for a lengthy finish. Another enticing version of the Andrew Peller Signature Savvy B.  Price: $30.00 – Rating: ****

Get the FREE Grape Guy Events App - Plus there are plenty of prizes to be won ... 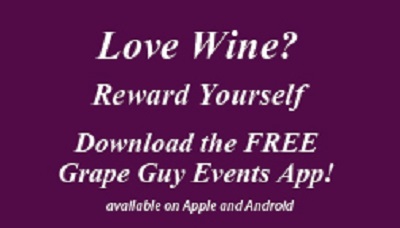 PODCAST:  Two Guys Talking Wine
Join me and my co-host Andre Proulx as we discuss all things wine, and sometimes we're not afraid to go off topic
Episode 22 - Talkin' With La Crema
Episode 23 - Talkin' with Paul Bosc Sr

GRAPE GUY EVENTS Spotlight:  Make the Most of Your Trip to Wine Country

Grape Guy Events, highlights from the APP - points to be had:

Don't have the APP? Click here to get it, it's FREE and you could win some great prizes just for downloading.

© MichaelPinkusWineReview.com 2016. All rights reserved. You may use the content of this newsletter by including full credit to Michael Pinkus, Grape Guy and a link to www.michaelpinkuswinereview.com