I have written about the 100-point system on a number of occasions and I maintain to this day it is a broken scoring system because it has been taken over by too many people without understanding its true meaning: the system that has been bastardized by too many individuals who have co-opted it with their own interpretation so as to get their names in magazines, advertisements and on stickers on the throats of bottles. What was once great and understandable is now a shoddy mess:  it’s the new math of wine scoring.

So with that in mind I’m going to make it official, the Toronto Star has pulled an Arthur Fonzarelli (in season 5 of Happy Days) and “jumped the shark” when it comes to their wine scoring. They have joined the likes of James Halliday and James Sucking in the elevated score department. For those not in the know, “jumping the shark” means: “crossing the point at which something that was once popular no longer warrants the attention it previously received … ” (Wikipedia) or as one of the contributors to Quara put it: “It’s a tacky ratings grab at the expense of quality or realism.”

I got into writing because I didn’t want to sell anything, I also liked writing, but selling things is on my list of my least popular vocational activities. Somebody once told me that no matter what you think you’re doing with your life you’re always selling something, be it a widget, a whatsit or yourself – selling is about convincing people they want something and then making them an offer they can’t refuse … My job is the halfway point: I want to convince you that what I’m writing about is what you want to get, but I never ask for the sale … that was always my hang up no matter what my job, from electronics to vacuums (yes I did that) that last little push of salesmanship always got in the way. But that part about selling oneself has always rung true to me and sadly it’s what wine writing has become all about: selling oneself – but these days it’s not because of your descriptive prose, these days it’s all about the score … who cares why so-and-so gave it a 95 – it’s gotta be good because it got a 95!

So what I saw in the Toronto Star September 21st had me shaking my head in disgust and sadness, then upon further research I became even more disheartened. First, I don’t know the last time I saw the Toronto Star have an article on a single wine, but when the writer touted it as their “highest score I’ve awarded a wine to date” that wine deserves a little more than a passing glance to explain yourself; yes, they explain the wine but they failed to explain their rational for such a high score – and that’s where this writer fails the reader: lack of openness and the full explanation – each and every time.

Here’s the skinny: The writer for the Star has skewed the 100 point system to fit their needs for preposterously high scores. It’s explained in this buried article (see question 5) … in a nutshell the scoring is based on price: for example $20 wines are scored against other $20 wines. BUT that is not how the system was developed – the system was to pit all wines against each other on the same scale and the cream would rise to the top. By skewing the intended system the scores rise thus giving the Star a reason to promote the reviews – the problem is they would need to be explained in every single review and on every sticker (eg. This is a 98 point wine based on all other $30 bottles of sparkling wine I have ever tried) … but this is not done and thus that 98 stands on its own, without any further explanation. In the end that causes confusion for readers and the public, who have come to understand the 100-point scale as it was developed. The Star’s writer has found a way to obfuscate and make the reviews more promotable:  A standalone 98 sounds better and looks better on a bottle than one with an explanation attached. In effect, the Star’s writer has changed the rules of the game, and then buried the new rules in the obit section where no one will find it; it’s as if we decided to play poker and halfway thru we changed the rules to lowest pair wins, but don’t tell any of the players who join the game.

In the end objectivity is all we have, by handing out these elevated scores, credibility and reliability go straight out the window. and if you have to get eyeballs to your column by inflating your scores or bastardizing the 100 point system to suit your needs, then my friend you have already lost your credibility.

The way I see it anyway.

Chateau des Charmes 2016 Cabernet Merlot Estate (W) - $15.95
www.fromtheboscfamily.com
This cab-Merlot blend is smooth, succulent but also has a seductive side to it; it’s easy drinking yet still shows complexity – the initial aromas and flavor profile dishes out mocha and cherry then adds blackberry, black cherry and spice to the palate … the spice kicks this wine up a notch but does not get in the way of all that lovely dark fruit at its core.  (****)

Fielding 2016 Red Conception (W) - $19.95
www.fieldingwines.com
A pseudo-Bordeaux blend of Merlot (39%), Cabernet Franc (27%) and Cabernet Sauvignon (27%) but with the addition of 7% Syrah it leaves the traditional Bordeaux-blend behind – it spends 15 months in neutral French oak barrels, which helps to give the wine a deep, rich, dark fruit and subtle spice, plus some black pepper notes on the finish. It’s a good value red that you should snap up without hesitation.  (****)

Five Rows 2015 Pinot Noir (W) - $55.00
www.fiverows.com
Lowrey Vineyard Pinot is de-regueur in Niagara, if you can get it, but you need to go to the source (Five Rows Craft Winery) to get the authentic version made by the family themselves. Aged in French oak (20% new in 2015) for 24 months. These vines were planted between 1984-1993 all with clone 115: earthy, smoky and spicy with sour cherry, smoked raspberry and a feminine delicacy across the palate … there’s a lot of smoky elements on this year’s model and the acidity helps to balance it off.  (****)

iCellars 2016 Syrah, Wismer-Edgerock (W) - $39.00
www.icellars.ca
This is iCellars first Syrah and something Adnan Icel would like to start playing with more – so he’s planted Syrah and Viognier in his own vineyard, to co-ferment in the future. This Wismer fruit is the impetus for this decision. 6 barrels in total were made: 2 used French and 4 new American … a slightly cherry rendition in the mouth with white pepper and smoke on the finish - there’s also a mid-palate laced with earthy, raspberry and smoked meat notes. For a first time wine it’s a delicious beginning.  (****)

Kacaba 2016 Syrah, Founders Select (W) - $44.95
www.kacaba.com
Syrah has become Kacaba’s calling card and this limited release version goes out to wine club members first before being released to the general public. Fruit is blueberry and raspberry, which tangoes around with the cedar/oak notes before the vanilla and white pepper cut in to make the entire dance end with a long and spicy flair. Another winning Syrah from Kacaba’s winemaking team.  (****)

KEW Vineyards 2014 Barrel Aged Blanc de Blancs (W) - $29.95
www.kewvineyards.com
This 100% Chardonnay sparkler spends one year in barrel as base wine before moving to bottle for two years and its secondary fermentation (aka: traditional method bubble making). Crisp and clean with notes of hazelnuts and lemon curd plus a touch of vanilla – all balanced with an fresh acid backbone.  (****+) 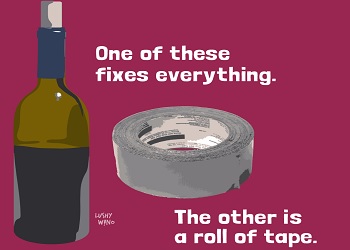 WEEKLY PODCAST:  Two Guys Talking Wine
Join me and my co-host Andre Proulx as we discuss all things wine, and sometimes we're not afraid to go off topic
Adventures in Bourbon (Episode 108)
with Tony Aspler (Episode 107- Legacy 12)
The Return of the Lake Erie North Shore (Episode 106)
Talking Value In Pricing (Episode 105)

Socially Speaking …
Follow Michael Pinkus, the Grape Guy’s (almost) daily Tweets at http://twitter.com/TheGrapeGuy .
You can become a friend on Facebook: http://www.facebook.com/?ref=home#!/mepinkus .
Those who are “Linked In” can find Michael at http://ca.linkedin.com/pub/michael-pinkus/14/704/4b8 .

© MichaelPinkusWineReview.com 2018. All rights reserved. You may use the content of this newsletter by including full credit to Michael Pinkus, Grape Guy and a link to www.michaelpinkuswinereview.com