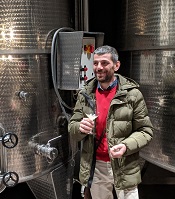 Last year I also stopped off at this winery (because everyone said “you have to go”), and while impressed enough with the wines to return – it was Giampaolo Tabarrini, the “elven-chef” of the winery, that is the true draw. His passion will pull you in and his sprightly nature is absolutely infectious.

Tabarrini is a single vineyard winery and has been since 2003, they own 16 hectares, produce 60,000 bottles a year and everything now goes through wild fermentation.

Giampaolo has three rules of winemaking: Be clean. Be clean. Be clean ... And the rest will follow. His production area shows that he adheres (almost religiously) to his “rules” – the area is spotless (you could eat off the floor - good news is he has a lovely communal table in the “kitchen” area so you don’t have to), the same can be said for his barrel room and any other part of the winery.

Tabarrini grows five grapes on his 16 hectares, and the breakdown goes something like this:  Sagrantino (7 hectares) / Sangiovese (2.5 hectares) / Barbera (1.5 hectares) / Trebbiano Spoletini (4 hectares) / Grero (1 hectare) – you will notice that all the grapes are native Italian varieties, and since 2006 he made the conscious decision to lean back into those Italian roots for his wines – even his Rosso has given up on any French varieties; he pulled out the Cabernet Sauvignon and Merlot in favor of Barbera, and as Giampaolo explains: Barbera is actually a central Italian variety that was taken to Piedmont where it has flourishing and become somewhat famous; Giampaolo explains the reason for Cabernet Sauvignon and Merlot’s appeal in central Italy is because it is what international merchants had asked for, now he feels it is time to reclaim the grapes of the region and showcase them in the wines he makes.

Tabarrini believes in a return to Italian varieties because he believes it makes the wines better and showcases "Italian-terroir and taste", he also hopes to see the region fully returned to them as well and adopt his philosophy.  After tasting the wines I would agree his wines definitely have an appeal and that he is on to something. 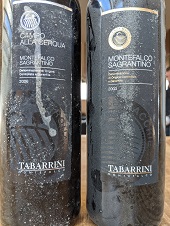 We did not try any of his current wines (they would be tasted later in the week during the Anteprima tasting days) – instead we toured the winery and had a light show in the barrel room (pictures below) – our tasting consisted of older vintages pulled at “random” from his cellar library.  I put the “random” in quotation marks because I would argue that Gianpaolo used a classic magicians sleight-of-hand trick on us, telling us to pick what we wanted to try, but then leading us to what he hadn't tasted in a while. Once I figured out what he was doing it was masterful to watch him steer those yelling out vintages to the choices that were actually his. Kudos to you Giampaolo – the good news most the wines we did try had aged well (both red and white).

Would I go again? Absolutely – and so should you, when you get the chance. 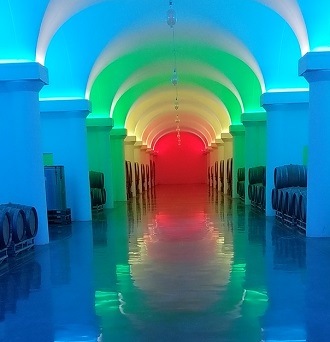