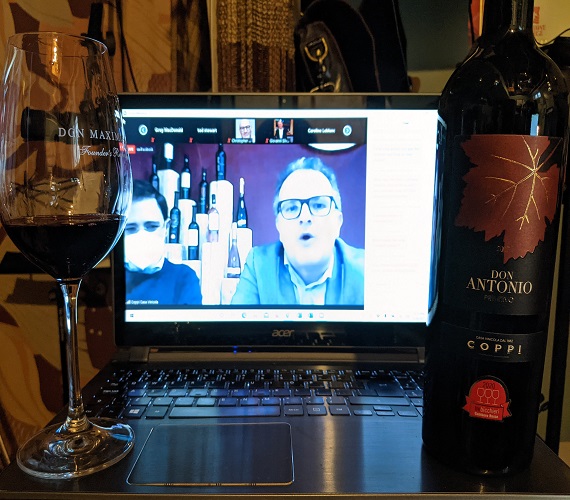 (March 2021) ... This “web show” had been in the works for a number of months before it finally came about. Dates were offered up as potential, but due to conditions and other factors that I'm sure have to do with getting wine into the country, the delay stretched on ... Finally, Gambero Rosso was able to have their show and we (as journalists) were privileged to enjoy these wines.

Who is Gambero Rosso???

Gambero Rosso is an Italian food and wine magazine and publishing group founded in 1986. The name translates to “red prawn” which is the name of the tavern in Pinocchio (where the fox and the cat dined). They have produced 24 editions of “The Italian Wine Bible” including the new 2021 edition.

The web show was broken down into two parts, held over two days (March 26th and March 30th) - each day eight wines were highlighted from throughout Italy - and each was specially selected by Gambero Rosso because of its high quality in showcasing Italian wine excellence.

Below are my selections/notes from the day one tasting:
(rating are out of 5 stars and appear at the end of the tasting note) 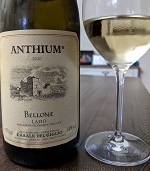 I had tasted Giglio’s Cesanese previously, and was so impressed I created a video review of it, so the winery was not new to me. What is new is this Bellone grape, which, as it turns out, is on the rise in popularity in Italian restaurants, although it is in limited plantings at the moment. The first vintage of this wine was in 2014. The grapes are harvested at the end of September, it is then macerated on skins (for aromas) and then gently pressed - finally it is wild fermented (partially in wood). The results are a wine with a nose that hints at peach, pineapple, mineral and vanilla; the palate is very fruity with notes of tropical, citrus and even some salty minerality finishing with notes of white peach. It's a lovely wine with texture, structure and beautiful minerality.  (****)
Video Review of This Wine

Poggio Le Volpi 2017 Roma Rosso Ed. Limitada (Lazio)
"Manlio Merge laid the first stone of the winery in 1920, when he began to produce and sell bulk wine.” - Gambero Rosso
A blend of Montepulciano, Syrah and Cesanese is grown in volcanic soils and spends one year in barrique. The nose is full of gentle spice and blackberry while the palate has a softness and juiciness to it: cherry and blackberry with a savoury / herbal character and meaty texture (almost chewy). It has a lovely balanced Zinfandel-like character that has a juiciness even while the tannins manage to keep it all in check.  (****)

Coppi 2017 Don Antonio Primitive (Puglia)
"The family business [was] established in 1976 by [the] Father, Antonio, who took over a winery founded in 1882.” - Gambero Rosso
This 100% Primitivo has lots of smoky dark cherry notes along with spice ... but it’s surprisingly fresh and light, considering it's 14.5% alcohol level, probably, and due in part to the great acidity, keeping this wine in balance (which is quite the trick). Fruit forward but backed with character, structure and deliciousness.  (****+)

Speri 2016 Amarone della Valpolicella Classico, Sant'Urbano (Veneto)
"The family were among the first to link their wines to their vineyard of origin ... Owners of one of the most beautiful vineyards on Mont Sant’ Urbano for over eighty years." - Gambero Rosso
70% of the wine is made up of Corvina Veronese and Corvinone with both Rondinella (25%) and Molinara (5%) - aged in 500L Allier oak casks (French) with 24 months and in 20 to 40 heciliter barrels for 18 months ... It’s not usual to call an Amarone "delicate” but this one maintains that with notes of licorice and spice, plus an incredible balance, even at 15% alcohol, which is hardly even noticeable - instead it's the dark fruit and acidity that takes center stage ... After 5 hours open it turns floral with lively cherry, and some smoky notes along with cigar box and chocolate: smooth entry, big tannins on the finish with an explosion of fruit / oak and spice mix.  (**** ½)

Late Arrival ...
There were two wines that were late arrivals due to being “blocked at customs”. One wine for each tasting this is a wine was from part one that arrived late. 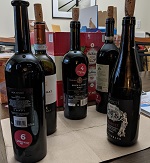 Dal Cero - Renita Corte Giacobbe 2018 Soave Runcata
"The areas of Ronca and Terrossa, on the slopes of the Calvarina, Crocetta and Duello volcanoes, represent a new frontier for Soave." - Gambero Rosso
This Soave is made from the winery’s oldest vines (80 plus years) and are grown at high altitude, helping them to retain good acidity. Not your typical (read: chuggable) Soave, this one shows complexity like beeswax and floral on the nose with honey, lemon, floral and minerality on the palate.  (*** ½) 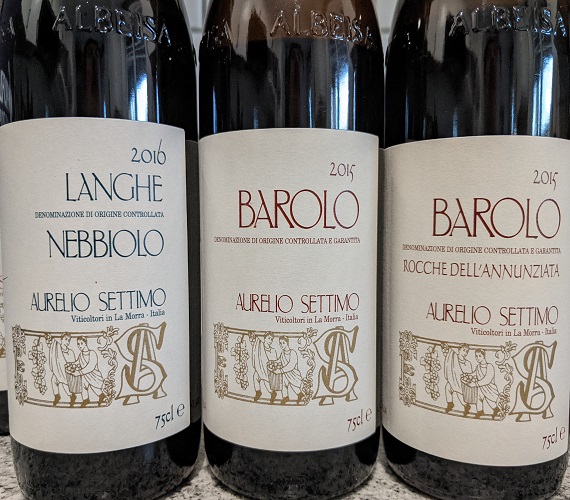 (March 2021) ... These Zoom Tasting are starting to have a very worn feel to them … thankfully the wines are always the star of the show – I know I speak for everyone in the wine industry in Canada when I say “I can’t wait to get back to in-person tastings”

Today it’s a sit down, in front of your computer screen with Tiziana Settimo of Aurelio Settimo Winery in Piedmont, Italy. For those not familiar with Piedmont, it is most notably the home of Barolo wine - those wines made with the Nebbiolo grape.

Aurelio Settimo, the winery, is currently self-sufficient in their grape and wine production, as they only use their own grapes: Nebbiolo and Dolcetto to make their wines, plus as of 2017 they have signed onto the “Green Experience” with more than 100 other producers of the area. This means the use of natural fertilizers, no chemicals are used in the vineyard and special products are used for spraying the crop ... They are not organic, and this is not an organic certification, but they are moving in that direction.

According to Tiziana, when asked about the vintages we were about to taste, she had this to say: 2018 and 2015 we're similar during winter time ... 2012 and 2016 were similar in temperature ... 2015 was the anomaly in the whole mess with its extreme temperatures, making it a much hotter vintage - while the other vintages involved in the tasting were not as extreme. As an example, in 2015 the grapes were picked early and harvest ended at the end of September – for point of reference: usually harvest begins at the end of September.

These Dolcetto grapes were picked in September, which is a much more normal time, compared to 2017 when they were picked in August (which is the earliest ever) all to maintain the acidity and freshness Tiziana craves in these wines. The result is a fresh and fruity wine with really good acid balance - the fruit profile ranges from cherry to cranberry with a subtle herbal note.  (*** ½)

“This is what I am looking for in my Dolcetto, lower alcohol, fruity and freshness.” - Tiziana Settimo

Aurelio Settimo 2016 Langhe Nebbiolo
Not sure it needs to be said anymore, but 2016 was a “great vintage” in Italy - and Piedmont was no exception. This Nebbiolo wine uses the grapes from younger vines (though a minimum of 10 to 12 years), sees no oak - but it does see the inside of a concrete tank for about 36 months. The first vintage was way back in the 60s and was meant to show the true expression of the Nebbiolo grape. It's here where power meets elegance, for a non-oaked wine, there's nice weight and great structure, both spicy and earthy, with blackberry, mineral and good acid punch ... This one's ready now or ageable 5 plus years.  (****)

Production is the same for both the single vineyard and “estate” Barolo: using 2,500 to 3500 L barrels. They start with 12 months in new Austrian oak (which has a tighter grain) then move from there into French Allier / Never 2500 to 3500 L barrels for 7 months (these barrels are all “used”). 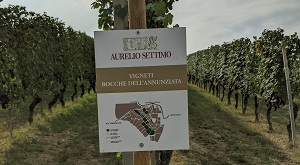 Usually, you need to lay a bottle of Barolo down years to get the full benefits, but 2015 was a very different year, and while this could see the cellar for a number of years to come, there is an approachability factor here worth exploring now. Aromas of floral, cherry, cranberry and spice lead to very much the same on the palate ... the wine comes across light and easy, almost silky, with more spice notes than tannin bite. Rugged yet approachable with a medium length finish and a real drink now feel; but cellar time will also bump up that complexity.  (****+)

Aurelio Settimo 2015 Barolo, Rocche dell'Annunziata
This single vineyard, or “cru”, Barolo is aged extra time in barrel, cask and bottle - a total of 42 months before release and most of the wood is of the older French variety (between 12 and 18 years) large casks with no toast ... When all is said and done only 20% is new, meaning the wood does not play a significant role in flavouring. The Rocche is just a baby at the moment with aromas of rose petal, mocha, black cherry, black cranberry and all those smells translate to the palate, but with a power and weight on the tongue – plus there’s great structure and a hint of smoke. Ready in another couple of years, but will age well for a decade or more (many more) but it’s all going to depend if you want to keep that fruit profile intact.  (****) 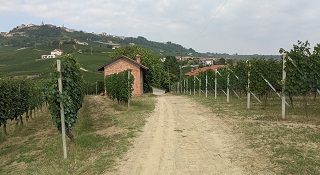 The Riserva wines are made from the oldest vineyards and are a vineyard selection, in 2012 they were from 40-to 60-year-old vines - this is a wine that is not made every year. The previous time it was made was in 2009 and the next will be 2016. They are looking for a low yield (3 to 4 bunches per plant). The 2012 was bottled in 2019; spent 26 months in oak and another 2 years in bottle. Only 3,500 bottles were produced. There are interesting notes of walnut and pecan shells, but also cherry, strawberry, red currant and spice - there's a nice velvety texture on the mid-palate, but there is still some tannin grip along with spicy, balsamic and even some Worcestershire notes on the finish ... Tannins continue to be pretty big and impressive (not oppressive) as it opens.  (****+)