A dozen for the ALCS (All Ontario)

(October 16, 2015) ... Four days later the Jays were in the AL Championship series and once again Larry and I congregated to watch the game and try another box worth of wine ... With the higher caliber of game came a higher calibre of wine, or so I hoped. This time all the wines were from Ontario. 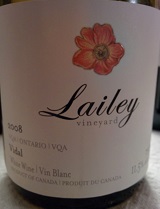 Lailey 2008 Vidal (not previously reviewed) ... You could have slapped me around and called me Lolita after tasting this wine and I would have had nothing to say ... it truly was the surprise of the night ... a 7 year old vidal that still showed that touch of sweetness yet all balanced by enough acidity to make it very palateable - most amazing part is that was still drinking very nicely thru the course of the evening.

Lailey 2007 Chardonnay, Vino 50 (not previously reviewed) ... After the Vidal, which we wrongly assumed would be dead, we tried this ode to York University's 50 years and what a nasty piece of business this was; not even worth describing. It was for York University's 50th anniversary the wine itself didn't even come close to making it to its 8th ... disappointing due to its pedigree. Then again it is a collector's item only if you went to York.

Lailey 2007 Gamay-Zweigelt (click here for original review) ... This was the third of four bottles of Lailey to come out of this case of wine; the acidity is still very much intact, but the nose was offputing and the flavour is more sour fruit than anything else. Quite disappointing, but I had to admit we had little hope for this wine, and it delivered.

Smith & Wilson 2009 Pinot Noir (click here for original review) ... Did not receive VQA approval and I am still not sure why, it tasted like an older Pinot with a sweet fruit: cherry/strawberry upfront, pepper and a drying finish ... still quite decent. Larry, as a Pinot aficionado was impressed. 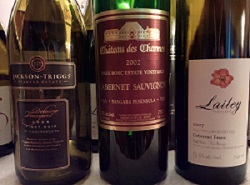 Chateau des Charmes 2002 Paul Bosc Cabernet Sauvignon (click here for original review) ... "Holy Shit" (as someone around the table muttered) layers of finesse and fruit and spice, dried cherry, vanilla, cinnamon - everything it should be and more; and all with a gorgeous mocha finish and super silky across the tongue.

Muscedere 2007 Cabernet Sauvignon (click here for original review) ... Nose and finish are way off-putting; mid-palate shows promise, but the beginning and end are what is killing this one

Colio 2007 Shiraz, Nine Barrel (CEV) (click here for original review) ... A little off mid-to-finish - something to be revisited because this should be much better ... The revisit did nothing to enhance our thoughts, someone even thought they picked up some rubber hose notes - oh boy, wonder if I have more of this cause in its youth it was pretty good.

Lailey 2007 Cabernet Franc (click here for original review) ... Tobacco, pepper, smoky, cassis, black raspberry ... so wonderful it defied description - we just kept sipping on it And enjoying the hell out of it ... it was one of three bottles that we finished - can you guess the other two?