(December 6, 2015) ... It's our annual holiday gathering with friends and my annual "hey, what kinda gems can I bring out of the cellar night"; but this year something happened on the way to tasting the big name stuff, questions were asked and I responded with a bottle:

Starting with a question about the (at the time) recently sold Lailey Winery which had me reaching for one of my older bottles of Lailey, a 2002 Cabernet Franc: consensus was leathery, vegetal, and dried raspberry - considered by all in attendance to be right where it should be at 13 years of age.

The next question was also Lailey-centric and surrounded their now former winemaker Derek Barnett ... remembering his Southbrook days a bottle of Southbrook 1998 Cabernet Franc emerged from the cellar (one of my oldest bottles of Ontario wine) ... this was still a layered wine with much complexity: spicy, leather, tomato leaf, vegetal, overtly dried-fruit (instead of fresh-fruit) for a 17 year old wine (be it Ontario or anywhere else) this was gorgeous. 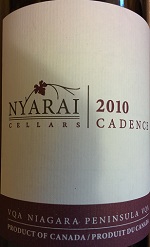 Continuing to play connect the dots with my guests the question of who took over from Derek at Lailey took shape, and while many had trouble remembering Colin What's-His-Name everyone seemed to remember Niagara's favourite black winemaker, Steve Byfield (before I get tons of email berating me for a recist remark, the previous sentence was okayed / cleared by Mr. Byfield) ... his virtual label is still going strong and one of his first solo red wines was the wine I came up from the depths: Nyarai 2010 Cadence, still a bright red with lots going for it: raspberry, spiced-cherry, peppery notes and just lovely fruit character that should hold another 3-4 years with ease.

Carrying on with question-and-bottle-answer period, our next query was 'where else, besides Southbrook and his own label, has Steve worked?' Answer: Thomas & Vaughan, Coffin Ridge, Cattail Creek and Ridgepoint, which is why a bottle of the Ridgepoint 2002 Nebbiolo materialized from down below: not surprised to find high acidity here (it's a signature of the grape) but there was also raspberry, sour cherry, and floral ... fruit seemed a little shrill with its high toned fruit but it was okay and better than expected.

Now that the questions and linkage has stopped we're four bottles into the night, no sense wasting the Ornellaia and Monte Bello on this group, so it's time to break into some interesting older wines I have kicking around, like this Australian Nepenthe 2003 Pinot Noir which ends up being the real surprise of the night:  surprising rich and flavourful and Pinot-esque for its age and origin (good Aussie Pinots are few and far between, maybe they just need age): sweet raspberry, cherry with tasty sweet red fruit on the palate.

The only wine that had been tasted before:
Nyarai 2010 Cadence (original review)