Taste it Again: Battle of the 07 Gamays

(January 25, 2016) ... The annual Wine Writers Circle dinner was held at Mistura this year and the food was delicious, but as usual I took little to no notes on the food and all on the wines. 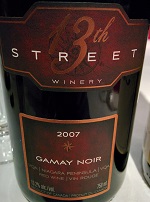 There were plenty of interesting bottles on the table I took note of the two I brought because the constituted a Gamay battle of epic proportions between two of the biggest and best names in Ontario Gamay:  13th Street and Malivoire - many in attendance tasted these wines throughout the night and a winner was crowned ... The bell rings (or the cap cracks) and the battle begins:

In this corner, wearing the burgundy-ish label with white lettering is the 13th Street 2007 Gamay Noir (what many believed, in 2007, the reigning Gamay champion in Ontario): smoky-licorice, touch earthy, black cherry, dried cranberry - it was initially the favourite as it showed quite well right off the hop, it came out swinging and connected with many taste buds along the way - but as time wore on it got a little sluggish and showed some tiredness. 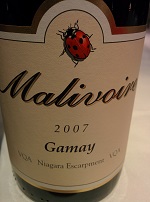 In the other corner, the challenger, wearing the mainly white label with black lettering, Malivoire 2007 Gamay:  vibrant fruit of red cherry, red licorice with a touch of mushroom on the finish - but it was not done there; with time this one just kept opening and showed multiple layers throughout the evening; when the 13th Street was starting to feel logy the Malivoire was just getting stronger ...

Hands down the winner by the end of the evening, not only by knockout, but also on the judges cards: the Malivoire 2007 Gamay.

This is the year (2007) Malivoire took the reigns from 13th Street as the best Gamay producer in Ontario and has never looked back; the was the last year of the great Gamays of 13th Street as the original reviews below will show.