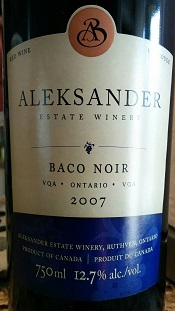 (May 22, 2016) ... We're over at my brothers for a dinner on the long weekend and because they love Baco (I can't explain this) I bring over a couple to try with them.  First up is the Aleksander 2007 Baco Noir:  leathery in taste and smell, bricky in colour, with elements of earth and sweet smoke - even my brother and sister-in-law find it hard to drink a full glass, but they also claim it is "not horrible"; it does not make sense to me but it does to them ... so I guess I'll go with it; they are afterall the Baco fans in the room.

I also get the chance to try the newest incarnation of Baco in the Henry of Pelham range, and while Baco still is not my grape of choice (by a long shot) this 2014 Baco Noir, Old Vines ($19.95) has real wine character, the Speck brothers have done it again - taking a lowly, unimpressive grape and turned it into a proper wine (folks this is a skill):  blackberry, 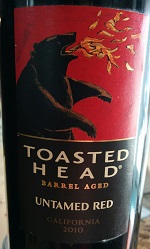 cassis, mocha, black cherry, with a nice hit of spiced black-cherry and acid on the finish. I would also like to take this opportunity to remind you if you like Henry of Pelham Baco, and it's the only Baco you can name, you are NOT a "Baco fan" you are a Henry of Pelham Baco fan, there's a distinction there.  (****+)

Moving on ... California also came to the party in the form of a Toasted Head 2010 Untamed Red, a blend of Syrah 45% / Petite Sirah 28% / Zinfandel 14% / Merlot 9% / Tannat 3% and Tempranillo 1% ... Red and black fruit with hints of plum, spice and licorice ... interesting red that probably was not meant for aging this long but does show fun characteristics that make it more interesting - drink young, but I see this wine as one of copycats of the Apothic reds of the world but with a little something extra - you don't make it this long with it. 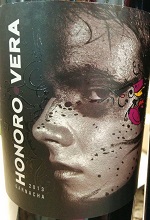 We ended up in Spain with a delicious Honoro Vera 2013 Garnacha, not much complexity but a whole lotta flavour:  rich plum, blackberry, black cherry and spice; juicy and delicious.