Taste it Again: An Ontario Foursome 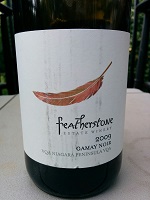 (June 1, 2016) ... There was some occasion for opening 4 bottles this night, but all I can remember is we had some folks over for dinner and decided to investigate some older Ontario wines, starting with a Featherstone 2009 Gamay Noir. '09 was a wet, very acid driven vintage, so varieties that benefit from high acidity did really well (ie: Riesling, Sauvignon Blanc); this Gamay had a pretty nose of violets and dried cherry while on the palate the alcohol seemed a little more in your face than expected. Palate showed elements of spice and dried cherry with bits of cranberry. We also saw a dramatic bricking in colour.

We moved on up the ladder to a Norman Hardie 2009 Cabernet Franc, same year, different region for winemaking - this might have been Norm's first Franc under his eponymous label ... Sadly vintage did not help with longevity for this wine, nor did the cooler region of Prince Edward County. Tons of old-school Ontario green pepper & green peas on the nose, palate proved to be a bit weedy, and hard to drink. There have been better versions made since. 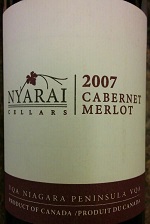 Two years earlier was the summer of 2007, which was a much nicer growing season and brought Ontario some gorgeous wines, like this initial red offering from a new (at the time) virtual winery:  Nyarai Cellars 2007 Cabernet Merlot - it has aged nicely with its dark fruit core, spice, and hint of vanilla on the finish. Still holding up well. 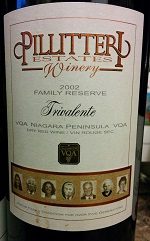 The star of the night was my heavy bottle of Pillitteri 2002 Trivalent, a blend of Cabernet Franc (50%), 30% Merlot and 20% Cabernet Sauvignon ... I've been waiting a long time to drag this one out of the cellar and now, at the 13 year mark, I pulled the trigger: dried dark and red fruit, with both dried and spiced cherry taking center stage, still showing firm tannins ... A big, for Ontario, 14% alcohol that still felt relatively young - remarks ranged from 'great bottle' to 'very Bordeaux in style'. Congrats to Pillitteri for putting this elegance in bottle, could probably go another 5 years - but drinking now might be the better way to go.