Taste it Again / Lost & Found: Living it up with Larry (or not)

(July 3, 2016) ... Another mass tasting with Larry Horne, author of Besotted, and another reason why my inscription in the book reads "to Michael Pinkus, whom I have tested more bad wine, and some good with" or something like that. Larry and I get together two to three times a year for a cellar raid of older Ontario wines. I have to hand it to Larry, he sticks with the program and tastes everything, no matter how bad it might smell - though he draws the line at corked: 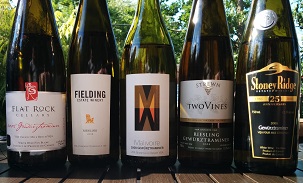 Fielding 2008 Riesling (Ontario) ... Sweet and uninspiring but otherwise okay - not exactly what I would have expected from this cool year, even the acidity seems to have dropped right off. (original review: click here)

Strewn 2008 Riesling-Gewurztraminer, Two Vines (Ontario) ... Absolutely atrocious; golden in colour and a real mess, we were not looking forward to the next wine if this was how Gewürztraminer fared from the 2008 vintage and this just had too much colour (read on) - no original review

Stoney Ridge 2008 Gewurztraminer (Ontario) ... Showed little in the way of a colour change, when compared to the Strewn, but this one had it's faults too. Too sweet, was our number one take away, but there is that spicy flavour coming through to help back up the sweetness, and there were plenty of other Gew-character that made this a real step up. - no original review

Flat Rock 2008 Gewurztraminer (Ontario) ... Saving the best Gew for last this Flat Rock '08 we considered the best of a bad lot wine; I thought it unbalanced and sweet at first, but it rounded out and came into its own with a little air; does show the brilliance of screwcap aging on a fresh wine  - it was most definitely drinkable, sure it was old but definitely not over the hill. (original review: click here)

Malivoire 2008 Gewurztraminer (Ontario) ... Our final Gewurzt we had high hopes for, but they were dashed quickly with our first sniff then taste: lanolin and soapy might seem like alright Gew charcteristics, but with a  few more sips we noticed  the wine to be flat, banal and a real dud. (original review: click here) 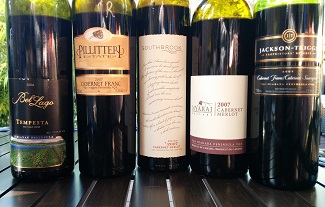 Bell Lago 2004 Tempesta (Michigan) ... One of our first non-Ontario wine of the tasting and maybe we gave it the benefit of the doubt because it was from Michigan, but this Cabernet Franc blend with "other selected varieties" delivered some forest floor, dried berries, earthy and herbal notes ... this one totally got lost in my cellar, as I doubt it was ever meant to age this long, but it still has a little life left in it - not bad for 12 year old Michigan wine; certainly bodes well for their future.

Pillitteri 2007 Cabernet Franc (Ontario) ... Was hoping for better from his prided- Franc producer:  Fruit is totally gone here and the wood and tannins are still quite aggressive - this one is roaring down the slope of disgrace, so we stopped drinking it. (original review: click here)

Jackson-Triggs 2007 Cabernet Franc / Cabernet Sauvignon (Ontario) ... Here's one of J-T's biggest mistakes, putting wine under plastic, this wine probably would still be quite tasty if not for their poor choice of closure - it was non-offensive but generally generic; I would say drinkable but drink quickly as the moment air gets to it it spoils quickly. (original review: click here)

Nyarai Cellars 2007 Cabernet Merlot (Ontario) ... The grapes were not sourced by Steve Byfield (owner / winemaker), but instead was wine he got for his time working at the now defunct Thomas &Vaughan because they stopped paying him actual money - it was a salvage effort at the time and this wine proved a good effort for his first red under his own label. Today you can see it has lost much of what made it such a good wine, it is very woody, herbaceous, leathery and dried out ... disappointing but understandable. (original review: click here)

Southbrook 2007 Cabernet-Merlot, Poetica (Ontario) ... As our last Ontario wine in this tasting we sat in hope with fingers crossed that this wine was going to be good ... And hazzah, as with the Flat Rock above this was the best of a bad lot of reds with its cedary, dried dark fruit, cinnamon, herbal and savoury notes ... This should have been better, but was passably okay and drinkable. - no original review

Moving out of Ontario for our last four wines, which all have international pedigree: 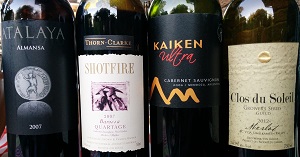 Clos du Soleil 2012 Grower's Series Guild Merlot (British Columbia) ... A real disappointment ... Too hot and has not held up, this 4 years old red from one of Canada's hottest growing area just didn't stack up; I would have expected more, and since this was Larry's contribution, so did he.

Kaiken 2006 Cabernet Sauvignon Ultra (Argentina) ... On the other hand, this 10 year old Argentine wine was delicious: spicy-dark chocolate, cassis, blackberry and spice; a wine we could easily have sat and sipped all on its own - well put together, well-aged, some would say graceful at 10 years.

Thorn-Clarke 2007 Shotfire Quartage (Australia) ... I'm a fan of Thorn-Clarke and even their older stuff holds intrigue to your average wine consumer. Sure this wine shows its age with savoury and spicy notes plus plenty of dried fruit ... but the good spicy finish helps bring it all together.

Atalaya 2007 Almansa (Spain) ... Love Spanish wines, they offer great value and longevity for their price; here at 11 years old blackberry, licorice, chocolate take charge of the wine ... It did take some time to open but once there it was fresh with the right amount of everything.