(October 7, 2016) ... Again Larry and I sit down with (mostly) Ontario wines to taste and opinionize ... today we started with the non-Ontaio first then moved on to our home region:

Laura Hartwig 2000 Cabernet Sauvignon ... soft and earthy with dried blackberry and cassis along with smoky notes, it's easy drinking with a cedary finish, plus there's a little eucalyptus note.

Henry of Pelham 2002 Baco Reserve (no original review) ... started off slow, meaning there was little to the nose, but once it opened there was a septic tank smell with volatile acidity that together made it truly offensive; shockingly bad for the pedigree 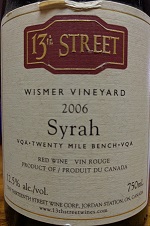 Mastronardi 2002 Merlot (original review) ... I really did expect a lot from this wine, but on the nose it was riddled with VA, so my expectation lessened, but the palate showed excellent promise: sweet blackberry, white smoke, smooth, silky, and very drinkable ... though it's time to drink up. 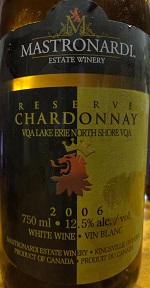 Mastronardi 2006 Chardonnay (original review) ... the second bottle of Mastronardi wine in this tasting did not fare as well as the Merlot, in fact I didn't know wine could taste this bad, we had so many derogatory things to say about it: "faulty can of creamed corn", "it's like Kraft Dinner with an overnight crust"; it's so awful I think we've hit a new low in wine tasting with Larry, and we have tasted some bad stuff in the past. 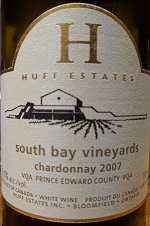 Huff 2007 Chardonnay, South Bay (original reivew) ... Not being an old Chardonnay fan I was leery about this wine but Larry quite enjoyed it and it became his white of the day (mine was the Peller at the bottom of this list):  candied corn, creamy with buttery-hazelnut and almond; there's a sweet nose with a palate that has a little caramel corn. Finish isn't bad either.

Lakeview 2002 Pinot Noir, Butler's Grant Vineyard (no original review) ... pulled a plastic plug out of the neck of the bottle and there was no redeeming features to speak of, this was the true definition of "swill", in fact so horrific it defied descriptors.

Legends 2007 Merlot, Reserve (original review) ... Another bottle that did not survive the years, though I would have expected more based on the pedigree of the vintage: VA and dirty barrel, even with time open it did not improve ... there were some cedary notes here but that's pretty much all we could define.

Konzelmann 2002 Merlot Reserve (no original review) ... it has an oxidized nose and the palate is oxidized as well: sweet fruit-ish but it is hard to enjoy because of the funky finish; we decided we didn't want to come back for more.

Rosehall Run 2006 Pinot Noir, Rosehall Vineyard (original review) ... I would not have tasted this wine based strictly on the nose, thankfully I am a professional and as long as it proclaims to be wine on the outside of the bottle I will taste it. It smelled like day-old-fart in the glass; but on the palate it showed a smoothness that lacked acidity, but there was also a little violet, some red fruit and a touch of bitterness.

Sandbanks 2006 Cabernet Franc (no original review) ... it's was a non-descript red wine, drinkable middle of the road chugger, I was impressed that was still drinkable, quite the pleasant surprise, especially at this age. 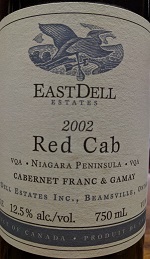 EastDell 2002 Red Cab (no original review) ... it's a Cabernet Franc / Gamay blend that shows notes that are a touch on the pruney side with good acidity, but let's face it, it's well past it's prime and really not worth your time - purely an educational wine at this point.

Palatine Hills 2004 Zweigelt (no original review) ... Zweigelt is a high acid grape to begin with, and at twelve years it seems that's pretty much what's left which makes this one mainly unpleasant, dirty and earthy. 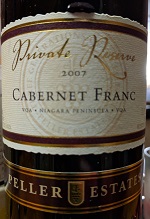 Peller 2007 Private Reserve Cabernet Franc (original review)... I had high hopes for this one and it delivered: smooth and pleasant with some woodsy character on the finish, but the high points are the dried cherry and raspberry with notes of tobacco - all signs of good aged Franc.