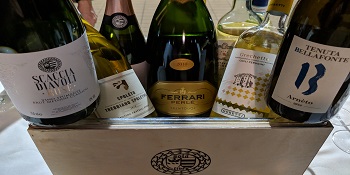 (February 19, 2019) – Montefalco … A traveling dinner that started at Scacciadiavoli and ended at Le Cimate … 8 producers “hosted” and joined in pouring four wines each over the course of the roving dinner. At Le Cimate each had three wines on offer and one each was poured over appetizers at Scacciadiavoli … Dinner was buffet style which allowed you to get up, and not only grab food, but try many of the wines at the bar … and might I add the dessert table was to die for … but I am here for the wines, so before digging into the plethora of cheeses, egg dishes and meat course that might materialize from the kitchen throughout the night I tried all the wines – here were the score-able wines of the night – plus a couple of reviews for the highest scoring: 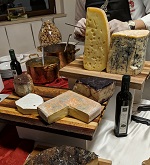 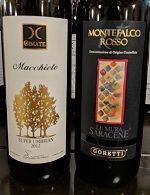 Summing up the dinner wines … Between Goretti and Le Cimate it was a tight race, I actually ended up scoring more wines from Goretti than Le Cimate, but the Cimate Super Umbrian was the wine of the night and will be getting the video treatment in the weeks ahead (read the full review here or click on the wine name) – for those keeping track Le Cimate received a total of 12 stars out of possible 20, while Goretti scored an impressive 16.5+ out of the same 20 star possibility – I am really hoping we see some of their wines in Ontario, where I live, and if you have access to them where you are, I would suggest putting your hands on a bottle or two – they show amazing consistency in the quality of their wines.