(September 2021) ... Probably one of the most eye-opening visits I have ever had - and hopefully this is as intriguing to you as it was to me. Let’s see:

First, let's start here ... Ceretto, as we know it today, was started by two cousins Bruno and Marcello in the 1950s; before that time Ricardo Ceretto was a negotiant buying fruit/juice and blending wine. The cousins decided to join Ricardo, but with a new philosophy “invest in the land”, which meant buying vineyards, cultivating your own grapes and making the wine from what you grew (not what someone else did). Then in the 1970s and '80s they created two wineries one in the Barolo region, and the other in Barbaresco. Today, 170 hectares is under their control.

So far nothing there seems at all surprising. An Italian family, with multiple generations in the wine business, making wine and buying land is pretty standard fare as far as stories go in this part of the world ... Now here's the kicker. Ceretto wanted to follow a Burgundian model with a red and white grape as their flagship wines. The red, because the region, is Nebbiolo, the white being the humble Arneis variety.

Now, for a quick aside, one of the jobs I do is wine cellar inventories, and I have seen a number of Ceretto wines in my time, as collectors love these wines for their age ability and collectability. The surprise comes now:

Ceretto makes 1.2 million bottles of wine a year, yet only 200,000 are their red wines (split between 15 labels) and the other million bottles are the Arneis (~700,000) and their Moscato D'Asti (~300,000). The massive Arneis project began in 1985 with 15 people in the vineyard, today with the expansion and popularity of their Arneis wine they have 50-plus people at harvest time.

Goes to show you really can't judge a book by its cover - this seemingly all red wine producer makes 1 million bottles of white ... And obviously the white wine program funds the red wine program. Interesting huh? 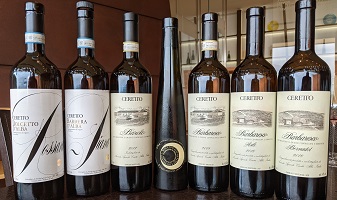 The tasting was spread out over three locations: lunch, their Barolo winery and their Barbaresco winery. I have also broken them down into sub-categories.

2020 Arneis (tasted out of Magnum)
Made all in stainless steel this is a refreshingly sippable wine that comes across as low acid - but very quaffable on a hot day. Arneis is naturally a low acid grape and the way Ceretto gets around that is a 20-day harvest cycle: starting with the grapes when they are slightly unripe (to keep it their natural acidity) then blending them with the ripe grapes - thus establishing its fruitiness.  (*** ½)

These are no oak or lightly oak wines - any of them could be chilled to elevate their freshness ... and here's where I state my bias of not being a huge Dolcetto fan - which is odd because Dolcetto is really THE original grape of Piedmont, and at one time was prized much more highly than Barolo wines were. With that said I will print here my Dolcetto tasting note, but no score will be given.

2020 Dolcetto D’Alba (Rossana)
Fruit pulled from a 8.65 hectare plot called Rosanna with production of 15,000 to 20,000 bottles annually ... Very sour cherry juice with big skin based tannins, it also has a very dark and dense color with incredibly high acidity. No oak is used here.

2019 Barbera D’Alba (Piana)
After the statement above about Dolcetto you would expect it to be the most planted variety in Piedmont, or even Nebbiolo considering how prized both Barolo and Barbaresco are ... But nope, you'd be wrong, it's Barbera. This is only a 2.75 hectare vineyard, produces 15,000 to 20,000 bottles annually and also sees no oak aging. Red fruit with good acidity - it comes across fresh and lively, could even be described as pretty with a really nice easy drinkability.  (*** ½)

2019 Nebbiolo D’Alba
This little beauty sees a minimum of 6 months in oak and in bottle - but more often than not it's a year for both ... Ceretto makes 20 to 25,000 bottles annually of this wine. It was also served chilled to maintain the freshness of the fruit, showing sour cherry and herbal notes - but as it warms up the red fruit core began to explode, with lots of fresh fruit and spice.  (*** ½+)

A quick pause to talk about the …
2020 Moscato D'Asti
This 300,000 bottle production is just what Dr. Guilty Pleasure ordered up: floral and pretty with notes of peach, pineapple and pear all with a seemingly dry-esque finish - those mid-palate fruit explosions really do play with sweetness and perception.  (*** ½+)

While the Barolo and Barbaresco “classic” wines hold some interest it's those single vineyard offerings that really spark the imagination. The difference between these two Nebbiolo-based wines is that Barolo is aged an extra year - the soil structure of Barbaresco makes the grapes “less age-worthy” in oak and Barbaresco has a much less hilly terrain, and there are larger plots of land to make up vineyard holdings ... The rest, as they say, is in the details of the soil. 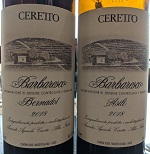 2018 Barbaresco - Bernadot
A part of this wine is aged one year in oak (small and large sized barresl) and one year in bottle – fruit is taken from a 4.84-hectare vineyard in the Barbaresco region with southern exposure vineyards and mineral rich soils ... Vine age it's about 30 plus years: spicy, tannic structure with earthy and mineral notes (read: salty) undertones.  (*** ½+)

2018 Barbaresco - Asili
The more popular of the Ceretto Barbaresco offerings is definitely more typical of wines from the area with fruit taken off 50 plus year old vines. Red fruit dominates with notes that are soft and pretty with floral, good acidity and gentle tannins - it does have a touch of earthiness with time in glass, but those dried red fruits really grab the tongue on the finish and makes one want to have another sip, and another sip, and another sip.  (****+) 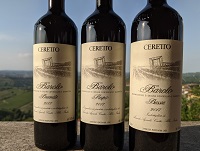 2017 Barolo - Brunate
Starts off earthy with good fruit, then follows up with some tannins a slight smoky nuance before adding in mocha, balsamic-strawberries and a floral hint. Quite pretty.  (****)

2017 Barolo - Bussia
Very red fruit dominant with notes of strawberry and raspberry backed by licorice, balsamic and spices ... Tannins are chalky, but not aggressive, with a ripe cherry linger.  (****)

2017 Barolo - Prapo
Prapo shows why it is king of the Ceretto Nebbiolo collection. Fresh and fruity, though still slightly chalky with good acidity backing it all up ... Here the acidity is on point, there's a simplicity to this wine that really makes it sing in the mouth - then it leans into a sweet tart finish with notes of floral and balsamic appearing the longer it sits open. Lovely wine.  (****+)