(September 2021) ... I'm going to give you this first piece of info about Bersano that you may have been able to deduce it yourself - they were established as a winery entity in 1907... How would you know that? For the observant among you, and those on Instagram, it's right in their handle: @Bersano1907

Bersano was a late addition to my schedule, and I'm thrilled to have been able to fit them in, as they were able to shed more light on a topic that had been brought up the previous day at Gagliardo: Nizza. But before we get there let's look at some of the history of Bersano - which is a roller coaster ride of intrigue unto itself.

The Bersano winery was actually started by a butcher who saw the opportunity to make wine ... And today they are the biggest family winery in terms of land with 10 estates and 230 hectares producing 1.2 million bottles. The first vineyard was purchased in 1912: "Cremosina", a 15-hectare vineyard in the Monferrato area now known as Nizza DOCG (more on that in a bit).

In 1975, a Canadian company called Seagram's decided they wanted to get into the wine business in Italy and bought Bersano and all went well until 1978, because a Bersano family member was in charge until then. But left to their own devices Seagram’s could not navigate these Italian-wine-waters and they finally sold the winery back to an Italian family in 1985. 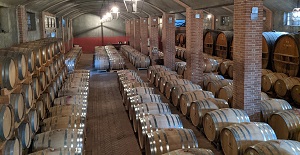 Bersano also has a very unique “barrel cellar”, which is housed on the third floor of their building. The reason for this oddity was because of the Bilbo River, which the building was close to - it flooded constantly and thus would ruin the wines in the cellar so in 1968 they had an architect and builder create for them a third-floor barrel room - and wouldn't you know it, the river has never flooded again. Now that's your very definition of irony (“an outcome of events contrary to what was, or might have been, expected.” - Dictionary.com)

Bersano also produces Barbaresco as well as Barolo - and all are produced in this one facility under a special license that grandfathers them in - but the grapes for these wines must obviously come from their respective DOCG areas.

Also interesting to note is that 80% of the grapes used by Bersano are owned by the company ... And they abandoned small barrels, or barrique, for large casks some 15 years ago, but they still have a number of empty barrels in their “cellar" as a reminder not to go back - or they might also be for sale, whichever comes first. Finally, Bersano makes 5% white wine and 95% red. Time to taste ... 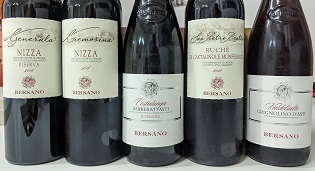 While some of the history of this winery escaped my notice and never made it into my notes - trust me, there were some complicated happenings that included other families, secretaries and secret wine formulas ... but the wines were also intriguing to me because of some of the indigenous varieties they used, plus the Nizza story, which I'll put in its own section.

2020 Roero Arneis
These are some of those bought grapes, of the 20% not controlled by the company, go into this Arneis which is an easy drinking light white with low acidity; but there is a refreshment factor about these wines as well, this one was no different: fresh and easy with beeswax and citrus pith.  (***)

2020 Grignolino D'Asti - Valdelsalto
This grape “Grignolino” has lots of seeds, which is supposedly where it derives its name from ... The resulting wine is very light in color and is best served chilled. Plenty of sour-ish-ness to the fruit, but that also could be considered "freshness" by others. Sour cherry, cranberry and quite lively with its acid makeup. This is uncomplicated wine that has a place in the world - I'm just not sure where.  (*** ½)

2020 Ruché di Castagnole Monferrato - San Pietro Realto
So what can I tell you about the "Ruché" grape? It was a lost variety rediscovered in the 60s by a priest who just happened to be making wine from grapes he had “on hand” ... Realizing they were not like a grape he had used in the past he ended up doing some research and “rediscovered” the variety. Only seven villages are allowed to make this DOCG wine - in total there are 28 producers making 1 million bottles; but 3 producers make 70% of that number. And if you noticed it is a DOCG (since 2010). The wines created are usually of high alcohol - this particular single vineyard “San Pietro Realto” version has floral and black cherry notes with a rich flavour on the palate - and despite the high alcohol, has a lovely freshness with a touch of gritty tannins on the finish. But mainly, the wine is very cherry focused. A truly interesting find.  (*** ½+)

2020 Moscato D'Asti - Monteolivo (Mountain of Olives)
A pretty typical Moscato dusty bracket which means really tasty clothes bracket dash this guilty pleasure of mine never fails to put a smile on my face, when I sip it: floral, apple, pineapple, peach, apricot ... Sweet and so pretty.  (*** ½)

2018 Costalunga Barbera D'Asti Superiore
I reviewed the 2017 in video format / as well as written ... I found this to be a very value-priced - well-made Barbera, so I was excited to try the 2018 version. First, the pedigree: the grapes come from five different estates and the wine is aged for six-to-eight months in big barrels. Fruit forward, round and subtle of dark fruit with a dash of spice. Very simplely put, as that dark fruit gets enveloped by cloves and anise and the acidity keeps things humming along nicely; then the finish replays black cherry, black raspberry and spice - very simple, but very tasty ... Delicious. (****)

As someone who has rediscovered the joys of Barbera over the past year, I was quite intrigued to learn about Nizza, Italy's newest DOCG. Nizza is an old area, but one that took a long time for people to realize what was so special about it: Barbera grows incredibly well there - and the wines are above average quality. Everyone knows Nizza Barbera was special, but it finally got the recognition it was due (and deserved) in 2014 by being made a DOCG. The basic rules of Nizza are as follows:

2018 Nizza - Cremosina
This Nizza Barbera comes from the oldest vines of Barbera owned by Bersano (55 plus years) was aged the prerequisite 12 months in big oak casks and achieved 14.5% alcohol. Not only is the color of the wine dark, but it has a dark soul as well: mocha, spice, blackberry, cassis with good acidity and a lovely smokiness ... On the palate it's smooth, silky and dare I say sexy with a beauty mocha, black cherry finish. This was my second Nizza and I was already falling in love with these wines.  (****+)

2016 Riserva Nizza - Generala
Bersano purchased the Generala Vineyard in 1994 and started producing wine from it 2 years later ... The wine spent 18 months in large oak casks and hits 15% in the alcohol department. Cloves, smoke and herbal notes waft up out of the glass and up the nose, while the palate shows signs of mocha, black cherry, coffee bean and floral ... The finish has a spicy element to it, but also a nice creme de cassis note.  (****)