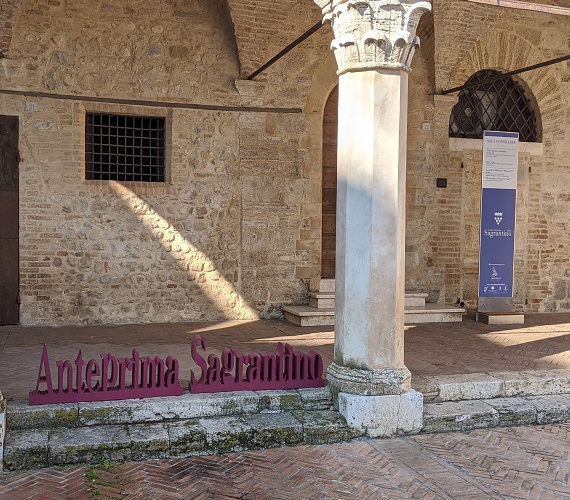 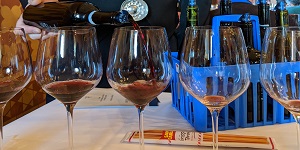 (February 2020) ... MONTEFALCO – For the second time I am doing the Anteprima for Sagrantino and thrilled to be back for comparative purposes … As a side note, Sagrantino has been DOC since 1979 and achieved DOCG status in 1992.  Since this is my second time I would like to note that it is always nice to see the way a region treats a grape over of a number of years in a row – with any luck I’ll be back to taste the 2017, 2018 and beyond to find out more about what makes Sagrantino such a special grape variety and witness its evolution.  Throughout the week I also visited with a number of producers to sample their wares and talk about the region, the vintage and the grape … those reports and observations will come at a later point (so keep watching the website or social media).

The Rules of Sagrantino …

The wines need 37 months before they can be released as official “Montefalco Sagrantino DOCG”, of which at least 12 months has to be in oak and 4 months in bottle.

2016 was an even more spectacular vintage than was the 2015 even though both are considered 5-star vintages (meaning: outstanding). If you thought everyone was excited about the former, watch out, 2016 has some jaw-dropping wines: these wines are out-and-out powerhouses. By using modern techniques and opting for the use of large wood many producers are learning to soften and curb what makes Sagrantino harsh and tough, to create a wine to drink sooner. Don’t get me wrong, it’s still a very age-worthy wine with lots of acidity, tannins and ballsy dark fruit, but it’s amazing what backing off from new barrique can do for a wine and creating less juice to wood ratio. Some literature refers to these wines as “astringent” (harshly biting) and when young they definitely have a grip and grit that may be hard to get around … but I’m impressed to see winemakers embracing ways to soften it and make it more approachable sooner without stripping the wine of its character. 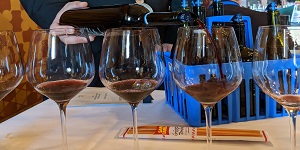 As a rule during these Anteprima I do not score unfinished wines (aka: barrel / tank samples), too much can go wrong between barrel and bottle that can compromise or otherwise change the wine … if that happens that score from a barrel sample can come back to bite me in the ass if the finished wine isn’t as I perceived it from barrel – so I have just stopped the practice of giving final scores to these wines.

The wines for the tasting were broken down into three categories: Barrel Sample, Bottle Sample and Finished … this year I treated everything the same going with my Good / Better / Best approach to “scoring”; besides these are definitely wines best rated on their future potential. 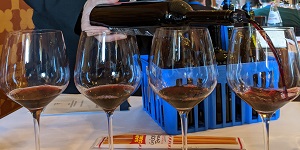 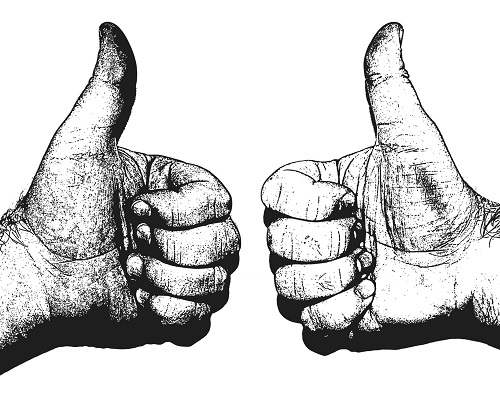 This is now going to be a bi-monthly feature on Two Guys Talking Wine, "Two Thumbs Up", an homage to film reviewers Gene Siskel and Roger Ebert, where we simplify the wine reviewing process to a couple of thumbs, or in some cases just one single thumb up, as a way of scoring wines ... you can listen to the accompanying podcast here - or read the notes below (trust me they are different):

Charme D’Alienor Cremant de Bordeaux - $17.95 … LCBO 438008
👍 - MICHAEL … Andre, this wine did not happen in our tasting accidentally, I reached out to the agent because I saw it in the Vintages guide and needed to try it; and I am telling you I am so glad I did. 90% Semillon and 10% Cabernet Franc with great acid, but it’s the fruit of tangerine that steps to the fore along with notes of floral and ginger ale - heck I’m going out to buy a half dozen.
👍 - ANDRE - Tangerine and honey crisp apple - but don’t expect champagne - the acid is perfectly balanced. This sparkling wine is so unique and damned tasty - I would put down the Prosecco and reach for this in a heartbeat.

2019 Trail Estate Oh Julius - $35.00 … Winery Only
👍 - A ... Something a little meaty - but great floral aromatics - quite crushable and a cacophony of flavours going from floral, to sour, to a slight pithy note on the finish. The finish is clean - which is good. Not my style normally but I would be happy to drink a bottle of this.
‎👎 - M … “Not my style?” Seriously, is this anybody’s style? I’m am so not a fan of this, there are four grapes in here and they do not play well together at all, the only thing about this wine that IS right is the name, I’m thinking of an Orange Julius when I taste it - and I hated those back in the day too.

2018 Henry of Pelham Speck Family Reserve Chardonnay - $29.95 … Winery Only
👍 - A ... Shut up Michael I can hear you already saying this is another “label label label” situation, but it’s not - this wine is definitely a new world style of Chardonnay, and there’s a ton of buttery popcorn in this glass, but a couple years in a cellar will reward you, don’t serve too cold and don’t serve too soon. You will thank me later.
👍 - M … Geez Andre you judge me too harshly and prematurely, I thought this was a decent Chardonnay and I agree it needs time because, although a little disjointed at the moment, the potential is there: peach cobbler, apple crisp, butterscotch, vanilla and an intense spice on the finish; I’d happily drink this one - but in 2-3 years.

2018 Trail Estate Chardonnay Vintage 3 - $40.00 … Winery Only
👍 - A - This is complex and so (expletive deleted) Prince Edward County it’s incredible - nice apple notes going from fresh golden delicious to bruisy baked apple. A bit of spice and there was a hint of matchstick on the start, but it should blow off. Well done Mackenzie [ed. note: winemaker].
👎 - M … Alright my good man, while I agree with you on the Henry of Pelham I have to disagree with you on this one.  First, this is NMC (Not My Chardonnay), point blank, but second, and, as Steve Miller sang, “I don't want to get caught up in any of that funky shit …” - I don’t find this one enjoyable in any way, too much of that funky Steve Miller - if you know what I mean.

2018 Flat Rock Good Kharma Chardonnay - $16.95 … LCBO 356873
👍 - A ... It supports a good cause. It’s affordable. And it’s got great balance. That being said, the acidity pushes the flavour profile into citrus, but in a few months we should start seeing some orchard fruit - this may not be as rich as previous vintages but a great food wine.
👎 - M … Your reasoning sucks on this one, and you’re giving it a pass because it is Chardonnay. You are right about it not being as good as previous vintages, which is why I am down on it, when you set a high bar I can’t just give you a pass because you made a wine.

2016 Lacey Lot 9 Cabernet Franc - $26.00 … Winery Only
👍 - M … This Franc comes from Niagara fruit and I think Kimball Lacey has done a nice job with it; there is a slight herbal note but it’s backed up by black cherry, cassis and black raspberry with a touch of white pepper and tobacco on the finish.
👍 - A … This super approachable Franc from the hot 2016 summer is good to go right now. There should still be a little bit of aging potential, but I wouldn’t want to waste all that delicious, ripe, juicy fruit coming out of the bottle now.

2018 Chateau des Charmes PInot Noir - $16.95 … LCBO 454697
👎 - A ... I was disappointed with this vintage of Pinot - I usually have high expectations of this wine, as it’s the gateway that will lead you to top shelf Ontario Pinot. Is it bad? No, but for being mediocre I have to give it a thumbs down.
👎 - M … I have to agree with you here André, not the best version of this wine by any stretch of the imagination, not even the price can rescue it.

2017 Chateau des Charmes Gamay Noir Droit - $17.95 - LCBO 346742
👍 - M … On the other hand this is a real beauty and I am still surprised there is no oak in here, lots of dark fruit, mocha and pepper … might just be one of the best Gamay Noir Droits to date.
👍 - A ...I hate doing the BOJO comparison, when I’m talking about stunning Ontario Gamay, but this definitely has me thinking high quality villages, or one of the lighter crus - a little meaty on the mid palate moves to spice on the finish; this is easily the best vintage of this wine I have ever tasted.

2016 Cabral Reserva Douro - $13.95 … LCBO 11632
👎 - A ... I couldn’t find any fruit on this wine under the pile of wood - and then when you think some fruit might decide to show up to the party the tannins tear your face off and stomps on it for good measure.
👍 - M … Wow you are in a bad mood today, how can you hate this wine? Dark fruit and juicy with mocha and bittersweet chocolate notes, you are going to be thrilled you bought this now and even more thrilled in 5 years when you open it and realize you should have bought more.

2017 Luigi Bosca Cabernet Sauvignon - $18.95 … LCBO 128629
👍 - A ... The nose is cinnamon hearts. Yet in spite of the confected nose there is great restraint and ripeness in the glass; this is super juicy without being jammy. Yum yum yum.
👍 - M … This wine rocks the house, I do believe this was one of the two bottles we finished at our tasting (so if people are listening to the accompanying podcast André is hopped up on Luigi and Gamay); it’s a cross between juiciness and balance with lots of dark fruit layered in with smoke, cinnamon and cedar … simply put, gorgeous (and age-able)

2016 Buena Vista Winery Napa Cabernet Sauvignon - $59.95 … LCBO 539106 (April 18, 2020)
👍 - A … This is where entry level Napa Valley wines get interesting. A little pricey for a Tuesday night sipper, but this wine is just so ... loveable. If you decide to open it immediately the tannin is soft and approachable - but the aging potential is awesome on this wine. Definitely my kind of Cali-Cab.
👎 - M … I hate to disagree with you on the last wine, but it’s not just the price that turns me off; it’s juicy, but not in the way Luigi was, this one is just all sweet fruit and lacks the balance to pull it off - and the price just pulls it down even further for me.