(February 1, 2015) ... This was a mammoth tasting, bigger than the last time I did the wine and football thing for the playoffs, this time it was held at my house but included some of the same people I saw for the playoff shindig. 12 Ontario wines had their tops removed with varying results, let's take a look:

Long Dog 2007 The Otto Riserva Pinot Noir, way back when I tasted this out of barrel I thought it one of the best County Pinots I had ever tasted; alas the folks at the dog decided inferior closure methods were the way to go and thus the results some 8 years from vintage date were probably not what they would have hoped for ... spiced oaked was all that was left in this wine, otherwise it was incredibly bland and uneventful. Too bad, it had the potential to be one of the greats.  Much the same could be said for the Long Dog 2006 Barrel Select Pinot Noir, it was totally oxidized, I again blame their poor chose of closure.

Next on the list might surprise many, a wine that you would have thought had plenty of years ahead of it, but at a recent tasting a fellow wine scribe warned me of some volatility starting to emerge in the wines of The Foreign Affair winery - one of the first in Ontario to use the appassimento method in their wines. So I opened the oldest bottle I had in my cellar, the Foreign Affair 2008 The Conspiracy.  Loaded with volatile acidity and high toned fruit, sadly the fruit seems to drop away from sip to finish (in the mouth) and all that you're left with is an oddly metallic aftertaste. All in attendance caught these notes as well.  It was something I was not expecting, sad outcome to say the least.

One of the star performers of the evening was a bottle of Peller Estates 2007 Private Reserve Cabernet Franc.  This wine has definitely hit its peak, but it's still very tasty: raspberry and tobacco with hints of smokiness and an absolutely lovely finish - I would say it is definitely time to drink what you got now. Looking in my cellar I have 4 bottles left and you'd better believe I'll be looking for reasons to open them this summer.

A wine I had real high hopes for was the Pelee Island 2007 Cabernet Sauvignon / Petit Verdot, but the characteristics of either grape were lost and all that was left behind was oak and sweet vanilla along with some plum and cherry.  There is very little here to keep one interested, it is a wine that's just there, call it a place holder till something better comes along; sadly the wine that came along next was not the one to do it:  a bottle of Hillebrand 2002 Trius Cabernet Franc. It almost brought me to tears to find out this wine is shot, there is nothing left and it has nothing left to give, the longer it is opened the worse it got.  This is my last bottle in my cellar so I'm glad I don't have to feed the drain with any more.

The next few wines were real high-points of the evening.  The Rosewood 2007 Pinot Noir had lots of black cherry, backed by nice acidity and a mocha finish; but what really shone through was the solid fruit core this wine showed throughout - brilliant effort and one that could still hold for a couple more years. The same applied to the Lailey 2012 Petit Verdot - unfiltered, very herbal with minimal acidity, but there's raspberry fruit which is front and center; quite pleasant, but this is one wine that should be drunk sooner rather than later. Another very drinkable wine was the Stonechurch 2007 Merlot - super easy drinking with blackberry, black cherry, and a sweet mid-palate which seems to find its way to the finish, a very unpretentious Merlot that did not take a lot of thought to enjoy. 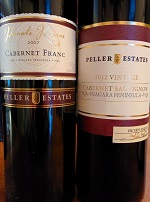 Peller Estates 2012 Cabernet Sauvignon, Private Reserve was brought out to show off something more recent from Ontario, and my full review of that one can be found here.  The last older bottle that wowed was the Hillebrand 2005 Trius Cabernet Franc, a complex wine for its age with some tobacco and raspberry greeting the nose, sweet vanilla-raspberry on the mid-palate and a nice red fruit, cassis, and sweet oak on the finish; another wine I have quite a few of in my cellar which will find their way to a few dinners over the summer ... If you have some I suggest you do the same.

Lastly and "leastly" was a bottle of Konzelmann 2007 Barrel Aged Shiraz was opened - it turned out to be very badly corked.