Taste it Again: Six from Ontario 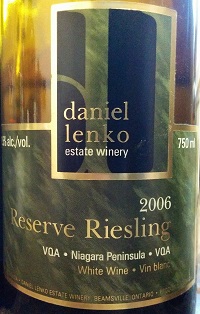 (March 26, 2016) ... My annual Canadian wine tasting for Quench magazine was for Vidal this year, the resulting article can be found here. It was interesting to note that table Vidal was much less prevalent then I would have suspected ... But since I had invited a friend or two over to share in the Vidal experience, I felt it only right to pull out some older Ontario bottles to see how they had fared over the years - here was our collective discovery:

Daniel Lenko 2006 Reserve Riesling ... Lenko only makes Reserve Riesling these days and at 10 years old this wine surprised many for its subtlety of flavour, but it did not start out that way: funky beginning and exotic aromas including coconut and apricot blossom with a core of bruised apple but the acidity was still lively and there was the tell-tale petrol note you'd expect to find in aged Riesling, but it wasn't over the top,.a good aged Ontario Riesling..

Vineland 2009 Semi-Dry Riesling ... A high acid year Riesling so there's no surprise here that the acidity was still quite lively and leading this wine on the palate, there was also a mineral / chalky -ness with peach and green apple. The Riesling is very much alive and well and drinking beautifully.

Henry of Pelham 2008 Barrel Fermented Chardonnay ... I'm no fan of aged Chardonnay, I've had too many disappointments in that category, but I've also had some great versions, so I'm never sure how long to age them (it's a real crap-shoot as far as I'm concerned) - this Henry of Pelham started off with bruised lemon-apple, citrus pith and zest all backed with a seam of good acidity; but in truth the appeal of this wine was far from winning us over, so we moved on. One of my friends present that night is a Chardonnay-maven and decided to reinvestigate the bottle an 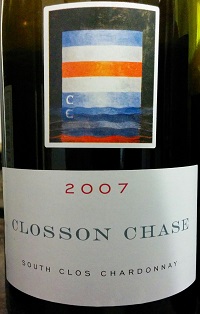 hour and a half later, to her astonishment, and everyone else's for that matter, the wine had added some very welcoming details to its profile including some buttery notes and a creamy mouthfeel with a lovely vanilla cream finish ... A head-scratcher for sure but one the did deliver.

Closson Chase 2007 South Clos Chardonnay ... So here's another older Chardonnay, a little bit older, and one from the eastern part of the province, made by one of the pioneers of the County. This proved to be gorgeous right from the get-go with a doughy beginning that gained momentum adding butter cream, and yeasty notes (felt like a cross between a sparkling and still wine) plus vanilla, apple sauce and pear nectare ... the mid-palate proved to be the most interesting with its mineral and spicy seam that stuck around through to the finish lingering with caramel and hints of almond ... Simply put this wine was gorgeous and creamy in all the right places. 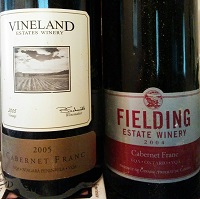 Fielding 2004 Cabernet Franc ... (no previous tasting) Moving on to the reds and I started with this bottle of Cabernet Franc from what many would think of as an 'off vintage'. Aromas that were along the side of smoky, earthy, and tomoto leaf while the palate had licorice, tobacco, and learthery notes leading the charge, followed by some fruits in the range of pomagranite and dried cranberry ... On the plus side it was smooth and silky. I would classify this 12 year old Franc as a "drink right now wine" as it's not getting any better but many would be very happy with it considering its age.

Vineland 2005 Cabernet Franc ... The final wine of the night was an 11 year old Franc that would have cost at most $13 when I bought it, and it turned out to be the Holy Shit wine of the night - it was just that good. No way you'd have guessed it's age at 11 years old, it was fresh and spicy with cassis, blackberry and tobacco along with hints of cedar and licorice ... a real beauty. Winemaker Brian Schmidt should pour this wine, drop the mic and walk out of the room ... a beauty job on this one.

See original reviews by clicking on the bolded name above