(January 18, 2015) ... Was invited over to a friend's house to enjoy what he called "the best day of football". I decided to bring over a half dozen bottles as my contribution, and considering his love for older Ontario wines it did not seem wrong to bring mostly older Canadian wines.

Started things off with an Nk'mip 2002 Pinot Noir from out west (British Columbia).  Nose showed a heavily smoked nature with some dried cranberry and cassis nuances. The palate was also smoky, with cedar and still plenty of tannin grit, this was backed up by some dried fruits sneaking their way in, but it proved to still be quite drinkable. Surprisingly it does show a little more fruit as it opens, sure it's still of the dried variety, but it gives the wine character of raspberry, cranberry and cassis, but always with that cedary-smokiness playing a role.  I also brought along a bottle of Fielding 2006 Syrah, which I had reviewed in my Taste it Again notes not too long ago - you can click here to read my thoughts. 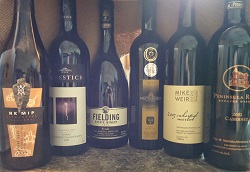 Before Opening: All Six Held Such PromiseSadly, the next three wines did not impress.  A Mastronardi 2002 Merlot, a medal winner, started off quite closed both on the nose and palate ... We decided to give it some time, both in bottle and in a decanter (splitting the bottle) - but the wine never seemed to open or go anywhere.  Much the same could be said for a bottle of Mike Weir 2005 Cabernet Merlot, which started off way too leathery with over-powering tannins; yes it mellowed with time, smoothing itself out, but when it finally did it showed a very hollow mid-palate. It was the equivalent of drinking a donut. Middle did finally fill in after about 3 hours adding in some earthiness and dried cassis; but it was a long way to go for very little reward. Speaking of little reward, a bottle of Peninsula Ridge 2002 Cabernet turned out to be corked and so all that ageing time was for not. A very poor showing for a trifecta of Ontario hot vintage wines.

Best wine of the day turned out to be my only foreign bottle, an Australian of all things: Firestick 2001 Shiraz / Cabernet Sauvignon ... Nose of black pepper, cinnamon, with a hint of welcoming menthol; on the palate the fruit was dark and peppery with hints of spice, it also showed a bit of its former jamminess, that I am sure was there in its youth. The finish was a delightful eucalyptus along with dried dark fruit all gently smoked.  As for the day of football, the Seahawks won a nail-biter while the Patriots made mincemeat of the Colts - 1 of 2 ain't bad.

Check out the original reviews for some of the above wines:
Fielding 2006 Syrah
Mastronardi 2002 Merlot
Peninsula Ridge 2002 Cabernet