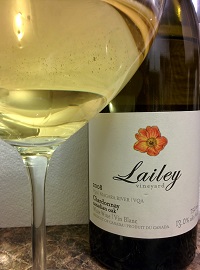 (March 13, 2015) ... This bottle of Lailey 2008 Canadian Oak Chardonnay originally picked up four-and-a-half stars from me and I drank it on a night where I also had a bottle of California Chardonnay, which was past its prime. Unlike its American counterpart the Canadian wine (aged in Canadian derived oak might I add) had a pleasant pineapple, coconut, and apple aroma followed on the palate by peach schnapps, apple core, coconut husk, peach pit, a decent amount of minerality, and a pinch of vanilla. The acidity has held up well and continues to be the backbone of this wine along with its long finish. The real surprise here was that after some 6+ years (from vintage date) the wine still maintains a certain element of freshness. There does not seem to be a rush to drink this one, but it sure does taste pretty good right now.