(April 25, 2015) ... Tonight we're invited to a get together with friends Jeff and Kim, and because they have an affiliation with a certain winery (one works for and the other is married to the guy who works for) I brought along a few bottles of older wines from said winery. 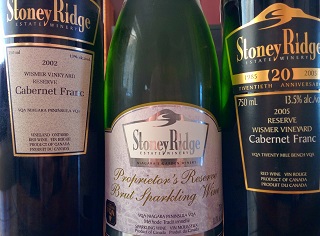 Alright the guessing game is over, or it should have been just by looking at the title of this post ... Here we're trying 3 old Stoney Ridge wines, a sparkling and two Francs. You always start with bubbles, and as it turns out it is one of Kim's favourite styles of wine (and I can not find fault in that what-so-ever), 2005 Proprietor's Reserve Brut Sparkling Wine - I don't know how many times Stoney Ridge made bubbles but I do know this was their first, and it was such a great bottle of bubbles back when it was released ... Fast forward ten years from vintage date and the question is, was would it still hold up? Answer: surprisingly well. Nose is apple and lemon while the palate was also lovely and fresh with apple, and a touch of lemon pith, the only drawback was the waning acidity ... But the color barely showed a hint of age - maybe light lemon (if you care about those kind of things) - all I know is not a drop was left. What a great way to start the evening.

Next up is a hot vintage comparison between the 2002 and 2005 Wismer Vineyard Reserve Cabernet Franc. Now the last time I had the 2005 was with my father-in-law when I brought a bottle to Michigan back in September (read that rave reviews here) ... As for the 2002 it was an interesting aged version. Nose came across meaty, and port-like, while the palate shows a touch of cedar, along with dried cherries, cassis, meaty notes and smoky characteristics - it softens quickly but still retains great acidity. These wines really show the beauty of aged Ontario wines in a hot vintage..