US Thanksgiving 2016 (A Very Special Tribute) 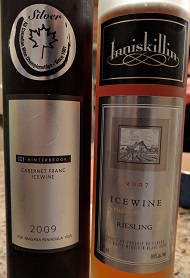 (November 24, 2016) ... It was the best of times, it was the worst of times ... or so the Tale of Two Cities starts - this year at Thanksgiving we went, as we always do, to celebrate with some friends across the river in New York ... but this year their was an element of sadness in the air: our friend's father had been recently diagnosed with cancer and the disease was doing a fine job of taking away this once athletic, vibrant and vivacious man turning him into a shell of his former self. It was hard to believe that just a year ago he was running "turkey trots" and cracking jokes, the frail old man that we walked in on this year still had the wit, but the body was not willing.  I always ask if anyone has any preferences for the wines I bring, and sparkling always seems to be a hit, but I caught wind that John had never tried icewine - as a Canadian and one from Ontario I was shocked but had the fix - not one but two bottle:

Inniskillin 2007 Riesling Icewine: if you're going to pour icewine you might as well go with the winery that made it famous, this 9 year old Riesling was a real dream, hitting all the high notes you want in an aged Icer: caramel, fig, honeyed and dried apricot with good balancing acidity to keep all those sweet flavours in check.

Wine two was a Hinterbrook 2009 Cabernet Franc Icewine, and if memory serves it would have been made by Natalie Spykowski; so a winemaker who knows her way around Franc and Icewine: here strawberry, balsamic, sweet black dried cherry and acidity that seemed to fit the vintage (high, because that is what 2009 is known for).

Less than two months later our friend's father, John, passed ... I was so glad to have met and known this man, his loving nature, his wit and charm, he was a pleasure to be around and a man I will miss sitting around that dinner table come Thanksgiving; and even though I saw him but once a year for a few hours he left a lasting impression ... I was glad to have been able to raise a glass or two with him over the years; the last two the most memorable of all.